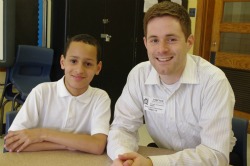 Little Brother KJ barely has time for lunch. He’s got an idea for a cartoon in his head and he needs to get it down in his notebook. He draws carefully and purposefully, hesitating to look up from his work – until he is asked what he likes best about being around Big Brother Joe Jovanovich. At that moment, KJ’s pencil stops and the creative fourth grader smiles, “He’s really cool and he’s fun.”

For KJ, the friendship he is developing with his volunteer mentor is just that simple. It’s about spending time with his really cool Big Brother and having fun. For Jovanovich, it’s equally as effortless. “You show up and be yourself. There are no special programs to learn. You are who you are,” the caring volunteer says adding, “You have the skills already – to be able to set an example and be a role model.”

KJ and Jovanovich, and Jovanovich’s wife, Lindsay, were matched almost two months ago through Big Brothers Big Sisters of Eastern Missouri. The Jovanoviches are a couple’s team, sharing the commitment to support and encourage KJ by being his friends.

Jovanovich used to work with students in his previous professional endeavors and had been feeling a pull to somehow get back to kids again. At the same time, his wife is a high school teacher. “She was looking for an opportunity to be involved with younger students,” Jovanovich recalls.

In addition to the preceding, Jovanovich is the 24:1 Initiative Project Manager at Beyond Housing. The 24:1 Initiative is a comprehensive community building effort that places part of its focus on supporting resources that buoy the academic success of all kids within the 24:1 footprint, which is focused on the Normandy School District geography.

“Volunteering with Big Brothers Big Sisters is a concrete way to be part of this community initiative.”Big Brother, Joe Jovanovich

Last year, Big Brothers Big Sisters became one of those resources through a special collaboration with the Normandy School District and Beyond Housing. As part of this alliance, Big Brothers Big Sisters agreed to match 50 students at Washington Elementary School with adult mentors in the 2011-2012 school year. These Bigs and Littles will form lasting relationships that will help the students both academically and socially. The Jovanoviches were teamed with one of the children in that group of 50.

“Volunteering with Big Brothers Big Sisters is a concrete way to be part of this community initiative,” Jovanovich says. The dedicated Big Brother’s office is right down the road from Washington Elementary. On the day of this interview, Jovanovich had stopped by the school for lunch with his Little Brother.

The friends’ time together is not limited to school visits, though. “We go places too,” the Little Brother shares. The friends have trekked to the Science Center and to the movies. KJ talks about plans to visit the Magic House.

“We have a lot in common,” Jovanovich shares, adding, “And he’s a very intelligent young man.” KJ talks about attending Harvard and lists Mizzou as his backup school.

KJ closes his notebook and nods in agreement. “I like having a Big Brother I can look up to,” he concludes.

For more information contact Vivian Gibson at 314-361-5900. Or apply to be a Big Brother or Big Sister here.