Little Brother Thomas offers a shy smile as a response when asked to describe what it’s been like to have a Big Brother. He gives it some thought before happily sharing, “It’s been a lot of fun.” 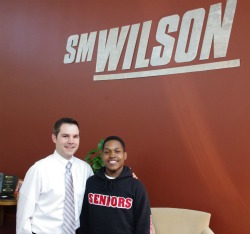 Big Brother Mark Winschel is equally as enthusiastic when he talks about what it’s like to have a Little Brother, “When we hang out it’s so cool. It is just neat to know that he is listening and that he’s bought into the idea that this kind of mentoring is valuable.”

The kind of mentoring to which Winschel refers is through Big Brothers Big Sisters of Eastern Missouri. Thomas was matched with Winschel, Director of Business Development at S. M. Wilson, in June 2010 and the duo have been growing their friendship ever since. The pair used to meet for lunch at the Construction Careers Center (CCC), when Thomas was in high school. The friends also gathered outside of school. Mark and Thomas have attended a Rams game and Cardinals game, golfed, enjoyed a pizza night with Mark’s family, and gone to Dave and Buster’s, just to name a few of the highlights.

“We talk on the phone and text too,” Winschel says, “It doesn’t always have to be some huge activity. Every interaction is important.”

“I want him to know that I’m always here if he needs me. I am his friend for life – his mentor for life.”Big Brother Mark Winschel

The oldest of six kids, Thomas has a lot of responsibilities at home. With his mom working lots of hours to support the family and his father not in the picture, the 18-year-old has taken on the role of the man of the house. His friendship with Winschel has offered him the chance to relax and, as Thomas so succinctly puts it, “It just makes me really happy and thankful because I know I always have Mark’s support.”

Winschel’s support was particularly key in Thomas’s final year of school. “He always reminds me to stay focused on the future and to never give up,” Thomas says. Thomas’s persistence and Winschel’s encouragement paid off. Thomas applied and was accepted at Philander Smith College in Arkansas and at the University of Missouri. In the late spring, he made the decision to enroll at Philander Smith.

Thomas graduated from the CCC, he also “graduated” from Big Brothers Big Sisters. In spite of the preceding, Winschel insists the friends will be forever linked. “I want him to know that I’m always here if he needs me,” Winschel says, “I am his friend for life – his mentor for life.”

Big Brothers Big Sisters is in critical need of more volunteers like Winschel. With more than 1,000 children in the greater St. Louis area currently waiting for a Big Brother or Big Sister, Winschel urges anyone who is considering the volunteer opportunity to do it. Winschel notes that S. M. Wilson supports such volunteerism. “Giving back to the community is a very important focus at S. M. Wilson,” Winschel says.