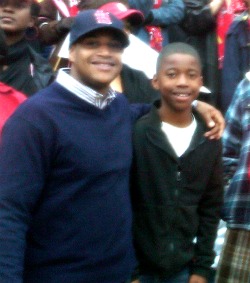 Preston Davis has known he wanted to become a Big Brother since he was a young boy. Between the ages of roughly 7 to 12 years old, Davis was a Little Brother to couples match Alice and David. “They made such a positive impact on my life. I wanted to share the same experience with a child,” Davis recalls, smiling, “Plus – it’s a good excuse to do all of the fun kid stuff!”

Making good on his longtime desire, Davis became a volunteer mentor through Big Brothers Big Sisters of Eastern Missouri a little more than two years ago. Teamed with 11-year-old Taron, Davis says the friends hit it off from day one.

“His maturity level is really high and he was very conversational at our first meeting,” Davis recalls. “Taron is a really intelligent kid and I think he has the potential to be very successful.”

Getting together roughly twice a month, the friends enjoy going to the movies, playing video games and just hanging out. Davis also tries to expose his Little Brother to new things when an opportunity arises. For example, the pair visited an African American History Exhibit at the History Museum recently.

While the kinds of activities this team has checked off their to-do list are vast and varied, Davis asserts it is the friends’ time together that is significant to his Little Brother. “I think the one thing he appreciates the most is me being there for him,” the thoughtful Big Brother says.

“. ..the two to three hours that Alice and David spent with me meant more than any movie or dinner.”Big Brother, Preston Davis

Time with his Big Brother and Big Sister was of tremendous importance to Davis when he was a Little. “I wouldn’t underestimate the value of the time you do give,” Davis suggests. “I can attest to that because the two to three hours that Alice and David spent with me meant more than any movie or dinner.”

Davis is a Communications Consultant in the Lending and Banking Services Department at Wells Fargo Advisors. Encouraging fellow team members to consider becoming a volunteer mentor, Davis concludes, “No one reaches any level of success by themselves. I’m sure everyone has received some kind of support along the way. This is an ideal way to make an impact.”

If you’d like to make a difference in a child’s life, consider giving the gift of time by becoming a volunteer or the gift of treasure by making a donation or by calling Vivian Gibson at 314-633-0055.