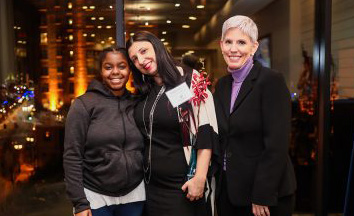 BBBSEMO Champs: 2018 Bigs, Parents, and Partners of the Year Honored at ANEW

National Mentoring Month started as a national campaign in 2002 to promote youth mentoring in the United States. At Big Brothers Big Sisters of Eastern Missouri, our goal is to change lives through relationship. So participating in that campaign has always made sense.

Please join us in celebrating yet another outstanding group of Bigs and Partners of the Year!

In 2013, BBBSEMO held its first National Mentoring month event to honor local mentoring champions including our Bigs and our community partners – both essential to building and supporting strong mentoring relationships, a critical ingredient to well-being over a lifetime.

This year we hosted our 7th annual National Mentoring Month event. While BBBSEMO celebrates life-changing mentorships every day, we set aside a special time each year to recognize the amazing champions who help us achieve our mission to Be There for our young people. After all, a caring, supportive adult relationship has been proven the single most important factor in preventing and even reversing the life-stalling effects of stress – particularly toxic stress. 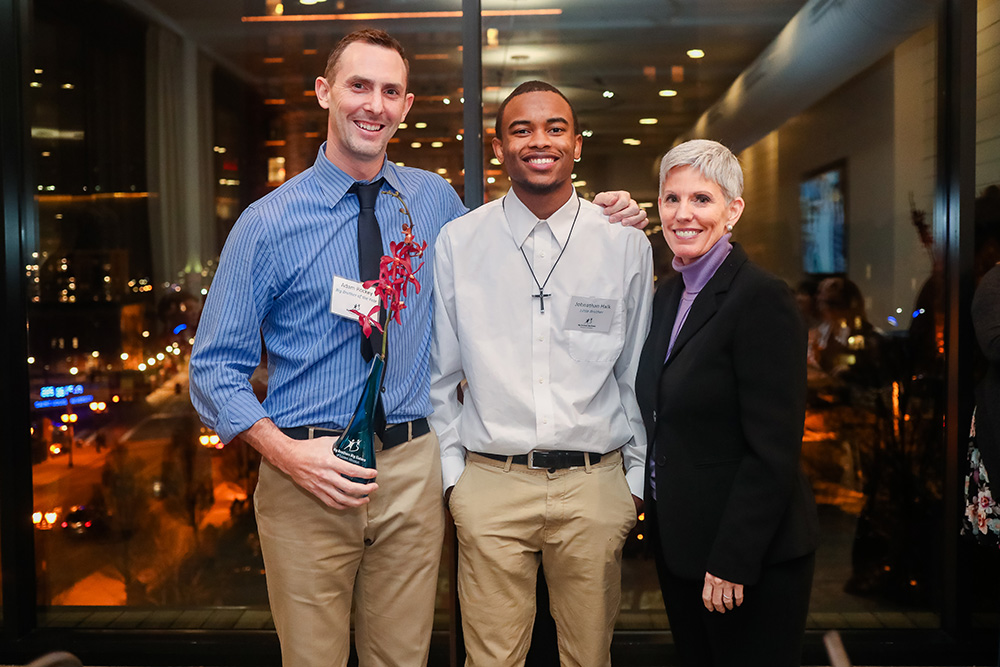 BIG BROTHER OF THE YEAR

“Johnathan probably doesn’t remember the first time we met, but that’s because he was SIX (crowd laughs). I look back at that, and it got me thinking, 'At what age did I stop holding your hand to cross the street?' (more laughter) and 'If there isn’t a moment in his life that he remembers a time I wasn’t there….' Johnathan, I hope that continues as long as you want. I just want to be there for you as long as I can. I’m just blessed to share this honor with you.” 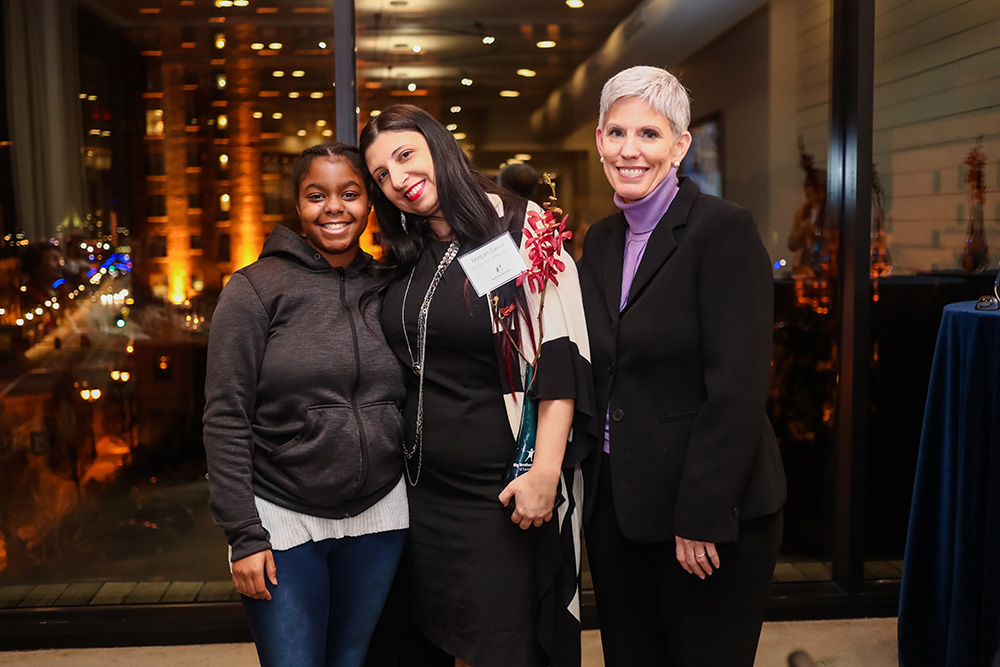 BIG SISTER OF THE YEAR

Megan: “Before we met, they told me Angel was a little bit of a troublemaker: that she was feisty, that she was kind of little but she was large. I was like, ‘Feisty… that sounds familiar (laughter from crowd). We might be a good fit…!’ Our match over the years really has been perfect. We’ve built bonds over painting nails, taking pictures, making gingerbread houses. We’ve been through losses together, too – her mother, her aunt, her grandma; my dad. We’ve been there to console one another and grieve at the same time. So there have been a lot of highs and a lot of lows. When I was away, or times were difficult, like shortly after Angel’s mom passed, I had a support system of family and friends. Our relationship’s really been about building community and relying on each other. It’s such a privilege to be part of this community, and a big honor to be here.”

Angel: “I’m shy, I’m not just short, so… (crowd laughs). I love her so much… (Turning to Megan) You have done so much for me and for my family… so much for us. I didn’t have much, and I wasn’t doing much. She showed me there’s something bigger out in the world, there’s more that you can experience. And I will always appreciate her, and [her partner] Chris, because he’s been there, too. I’ve had another Big Sister, so Megan’s not my first. But she IS my last (laughter again)!” 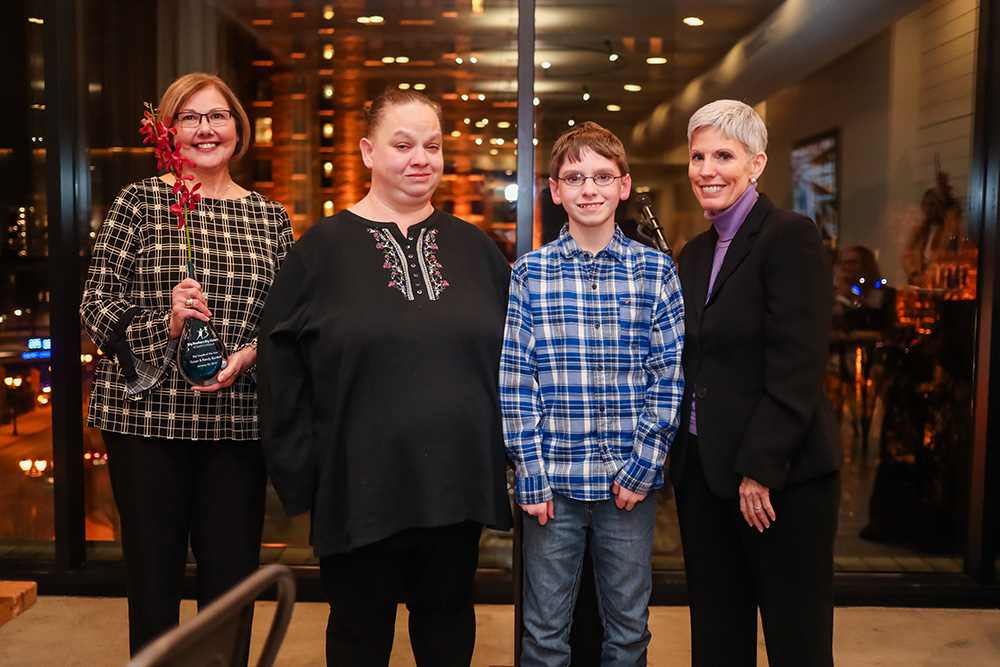 BIG COUPLE OF THE YEAR

Susan Bartlett with
Parent Mary and Little Brother James (15yo)

Susan: ““My husband Randy and I decided to become a Big Couple after our pastor gave a series of sermons on ‘The Fatherless Generation.’ Over the years of our match, we had great fun with James, and supported him in many ways. We have also been through some heartaches together. Randy passed away four years ago – on Monday, we found out he had a tumor on his pancreas; and he died the next Monday. About that time James lost his grandfather, too.... I could not have gone this journey without the love and support of my family, friends, and my church, as well as Big Brothers Big Sisters, especially when James’ grandfather passed…. I have four grandchildren, and my granddaughter is sitting right there (gesturing to table), and I adore them with all my heart – and this child, James, is my grandchild. Becoming a Big Sister is one the best things I’ve ever done in my life.” 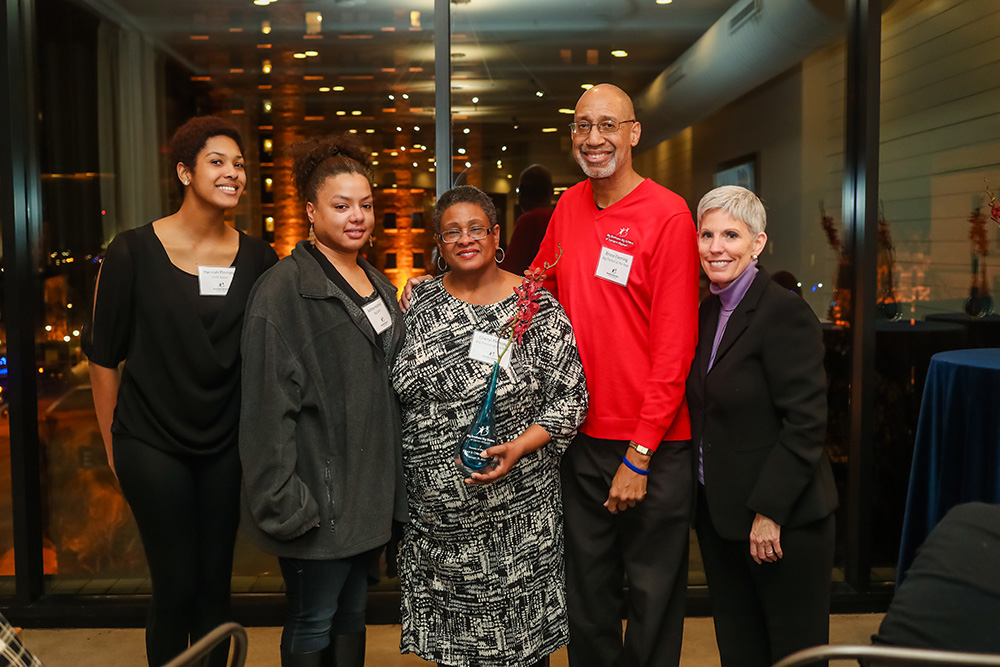 PARENTS OF THE YEAR

Bruce: “Having worked at this agency for 22 years – bear with me; I cry when the wind blows, okay? (crowd laughs) – I have had the privilege of meeting, and getting to know, hundreds and hundreds and hundreds of super, awesome parents. Because of that, I don’t understand why we’re getting this award, but I’m humbled by it because I’ve seen what an exceptional parent can do to enhance and move a relationship between a Big and Little.”

Cheryl: “I just want to thank you, Big Brothers Big Sisters, for giving my daughter a Big Sister, because it wasn’t happening here (gestures at Bruce and herself, Bruce makes face, crowd laughs). We have a bunch of family members who are ageing, and we wanted someone Hannah could talk to who wasn’t an elder. You gave Hannah someone she could relate to on her level, and Big Sister Ashley has been incredible. It’s remarkable to see how excited they both are when they spend time together. I’m so appreciative of Big Brothers Big Sisters for selecting someone of her caliber to be with my child.” 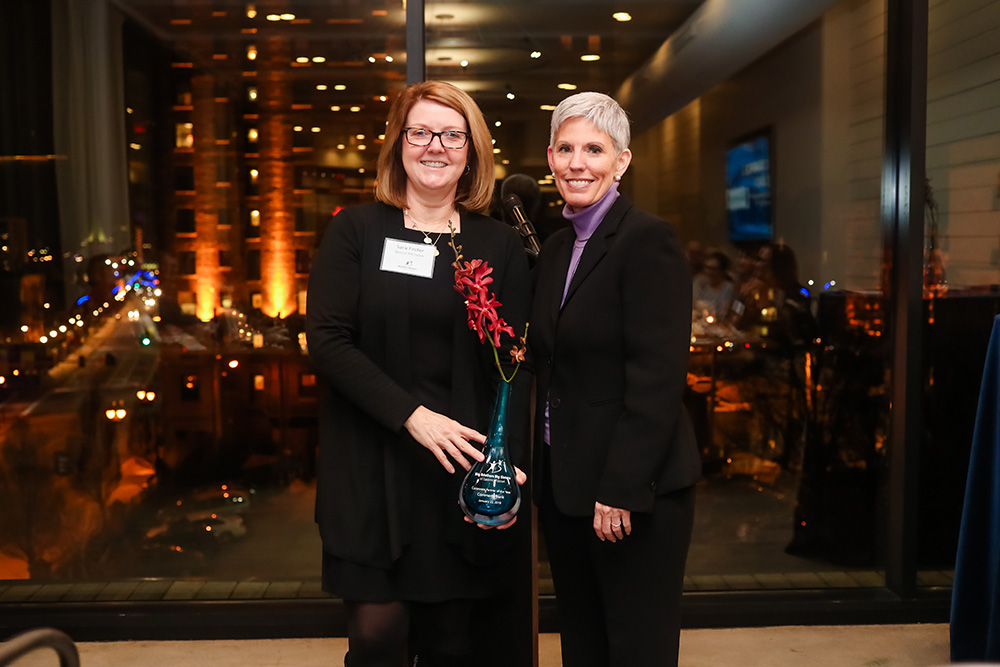 CORPORATE PARTNER OF THE YEAR

Sara Foster: “It’s interesting to think about how relationships grow, and the one between Big Brothers Big Sisters and Commerce Bank is no exception. I got engaged as a BBBSEMO board member 22 years ago, then got Commerce engaged; and there have been many people at the bank who have helped all along the way. The way things blossom – the relationships between Bigs and Littles, between the staff members who work here and all the people they serve – it’s amazing. Our partnership with Big Brothers Big Sisters comes in many shapes and forms… all good, and all representative of the best investments we’ve made at Commerce Bank.” 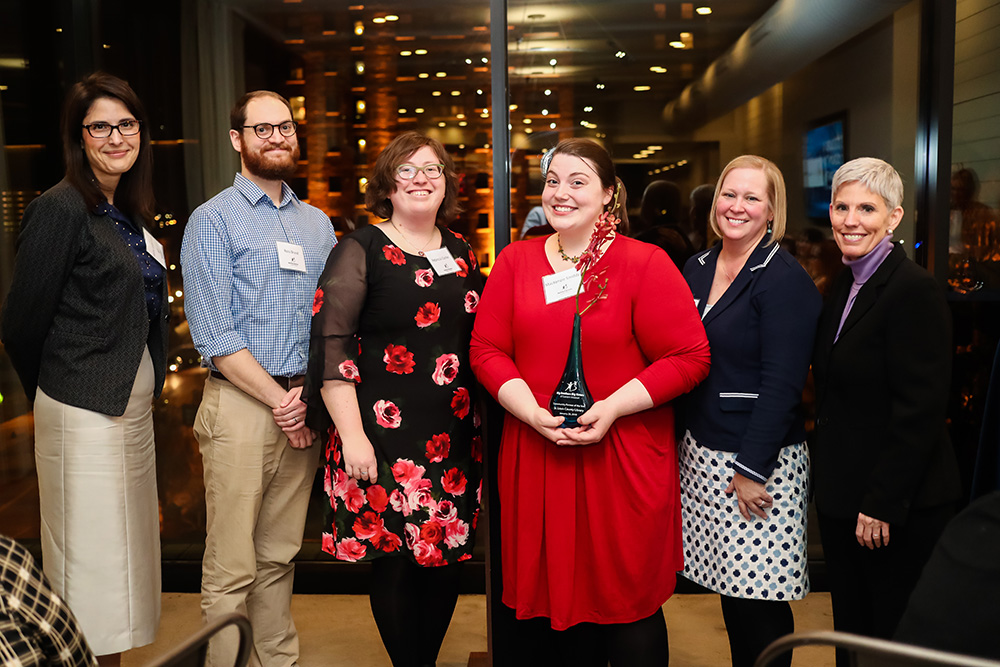 COMMUNITY PARTNER OF THE YEAR

MacKenzie Smiddy: “The relationship with Big Brothers Big Sisters came at just the right time, and it’s one of our library’s strongest partnerships. We’re just happy to be the ones to bring the fun, and the books, and all that good stuff to the students at Normandy 7th-8th Grade Center. And we hope to do that for many years to come!” 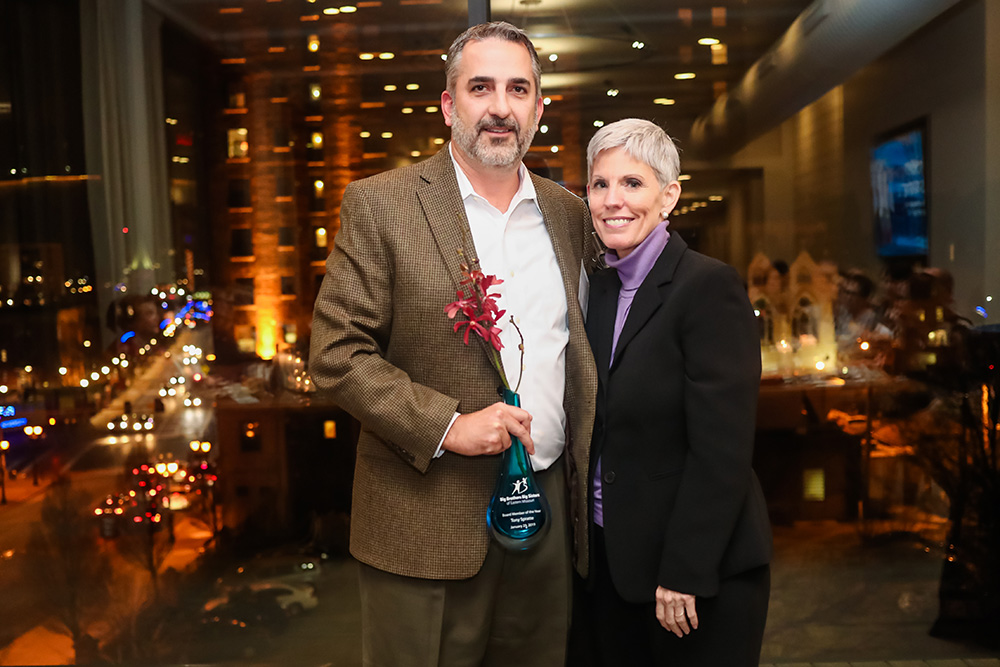 BOARD MEMBER OF THE YEAR

Tony: “I’m a little embarrassed to be up here after hearing all the stories of the Bigs who’ve come up here tonight, as well as the stories we hear at each Board meeting about the incredible things you’re doing. That’s the heart of this organization; any contribution I make to the Board pales in comparison, so thanks to all the Bigs in the room. And everything we do as a Board is based on what the staff does, and they make our job very easy. Working with all of you the past seven years I’ve served on the Board, and to see how the organization’s grown – it’s been a lot of fun, and an honor. It’s been a great experience.” 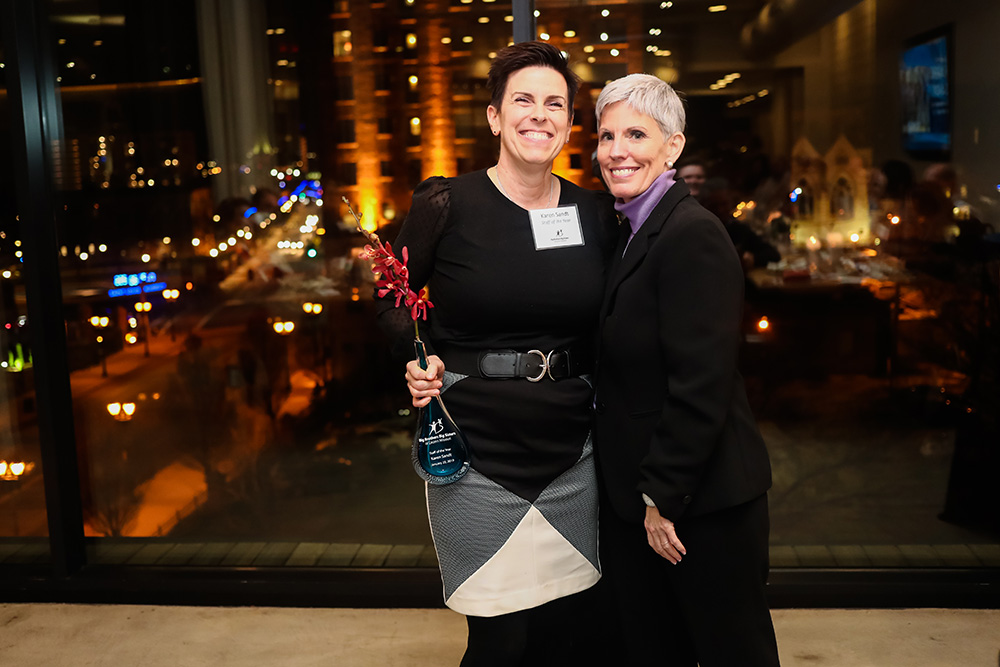 STAFF MEMBER OF THE YEAR

Karen: “If you can just put on your Imagination Hat with me, we’ll dial back to 1991, when I first heard about Big Brothers Big Sisters from my then-boyfriend/now-husband who had a Big Brother for 10 years. It changed the course of his life. That’s what sparked my interest in coming to this agency, and continues to spark my interest (dial back to 2019!). I get to see that life-change day in and day out. Thank you for letting me be the one to give credit to all of our staff; and to everyone with a hand in changing the life of a child by helping someone along… helping them discover that potential they already have.”

Completed with contributions from writer (and Big Sister) Catherine Martin

Thank you to every Big, Parent/Guardian, Partner, and agency supporter for making 2019’s National Mentoring Month activities so memorable!