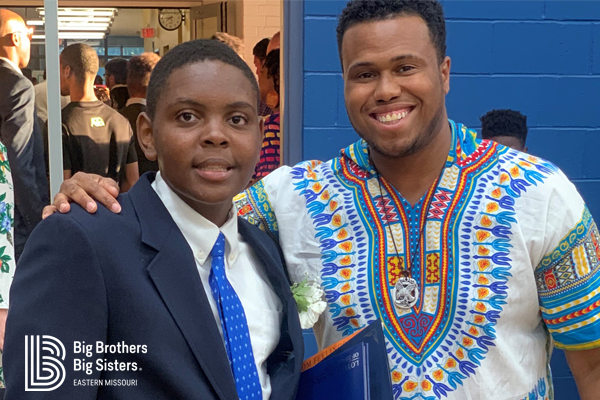 It all started with hot wings.

“When Akeem came in the room when we first met,” says Little Brother Tyrelle, “I knew he was a happy-spirited person but he looked scary because he had this trench coat on, and his facial expression…” Tyrelle laughs talking about his initial impression on his then-new Big. “But when we went out the same night to eat, we were talking and I saw, ‘This person isn’t scary, he’s a business person…' 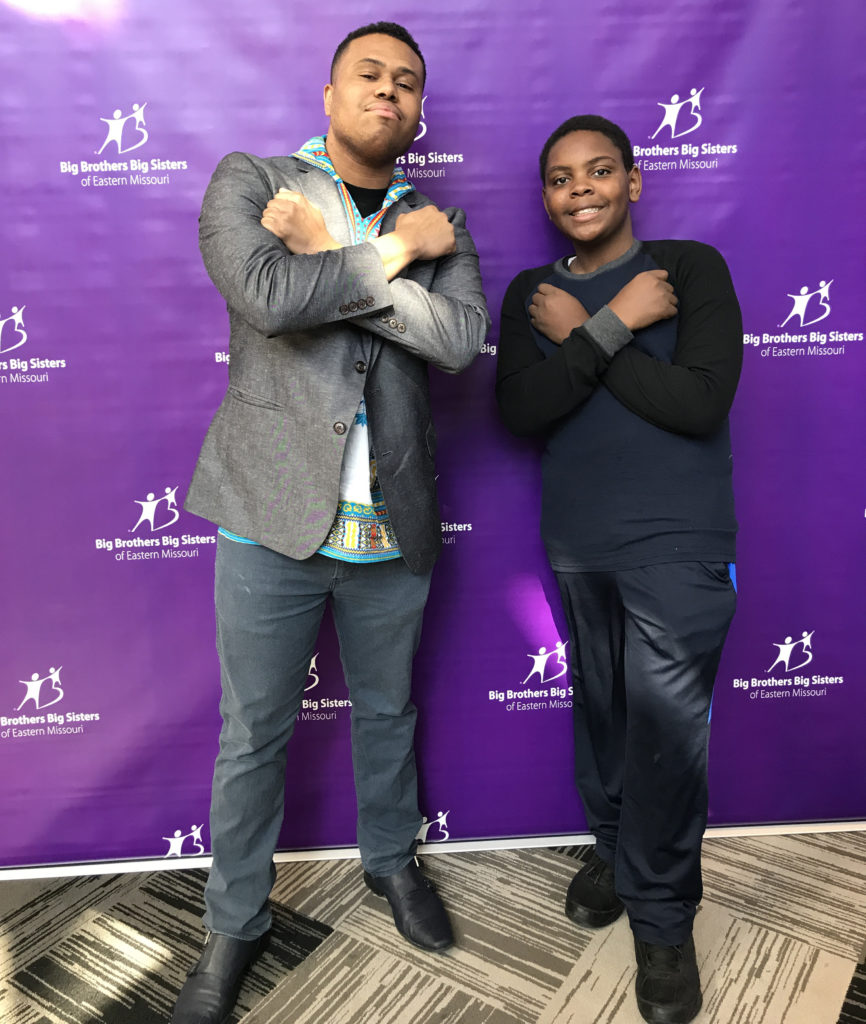 A mentor to listen

Tyrelle’s read on Akeem was spot-on. Akeem’s definitely about business, something he talks about with self-assurance and an easy smile. That combo has also set a distinct tone for his relationship with Tyrelle when it comes to self-expression.

That’s something Parent Makila hoped for when she signed her son up for a Big Brother a few years ago. “I knew at some point that because I am a woman, it would be nice for Tyrelle to have someone else to talk to,” says Ms. Makila, a past Little Sister who fondly remembers having a Big herself when she was a pre-teen. “Tyrelle spent a lot of his time in the hospital because of his scoliosis,” she explains.

“He was really shy before he met Akeem. Now, as he is getting older and out more, he’s outspoken. If Tyrelle and Akeem have different opinions, they can work through it.”

Putting words and time to paper

A literal example of that is Tyrelle’s writing. Akeem says the difference between 8th-grade Tyrelle’s work and what he’s doing now as a sophomore is “night and day.”

“Tyrelle would have to stay after school almost every day for English tutoring. He wrote the same way he talked, and a lot of it was just incoherent,” Akeem recalls. “So I would be on top of him. Every time I saw him I'd be like, "You need to get this English together. I know you watch enough movies and read enough comics to know how to write. You can do this."

Akeem’s frank, consistent follow-up bolstered Tyrelle’s efforts to the point Tyrelle started putting words to paper, outside classwork, as a personal hobby. An extra adult in Tyrelle’s life who was not his teacher, Akeem has played a differently impactful role as a Big Brother pushing his Little to be better.

“He’d write something, give it to his English teacher, and she'd be like, ‘This is great, Tyrelle.’ But I’d say, ‘You got a whole lot of grammar mistakes. You have a great story, but if people start reading and no one can understand it, are they going to finish?’ Once he understood that,” Akeem says, “he started to take and put more time into it.”

I told my mom and granny that I will make it, but I just didn't have a map.
This map needs a big red X on it. That's where I'm going to find my treasure.
You know, I thought about what can lead me to that red X. So I tried a bunch of things to see what could be my ship.
The ship and sail is white as a blank piece of copy paper.
My majestic words are the graceful winds that make my ship glide through the seven seas.
The lead of my pencil is the nails of the ship. I'm ready to take sail and hope that I find my treasure.
I will not stop till I get my treasure.

Tyrelle welcomes Akeem’s honesty. “He just told me up front what is good and what is bad. Most of what I do, he likes, but he tells me, ‘You can do better on this one’ and helps me so everything sounds smooth. Now, even when I think it’s perfect, I go back and rewrite it.” 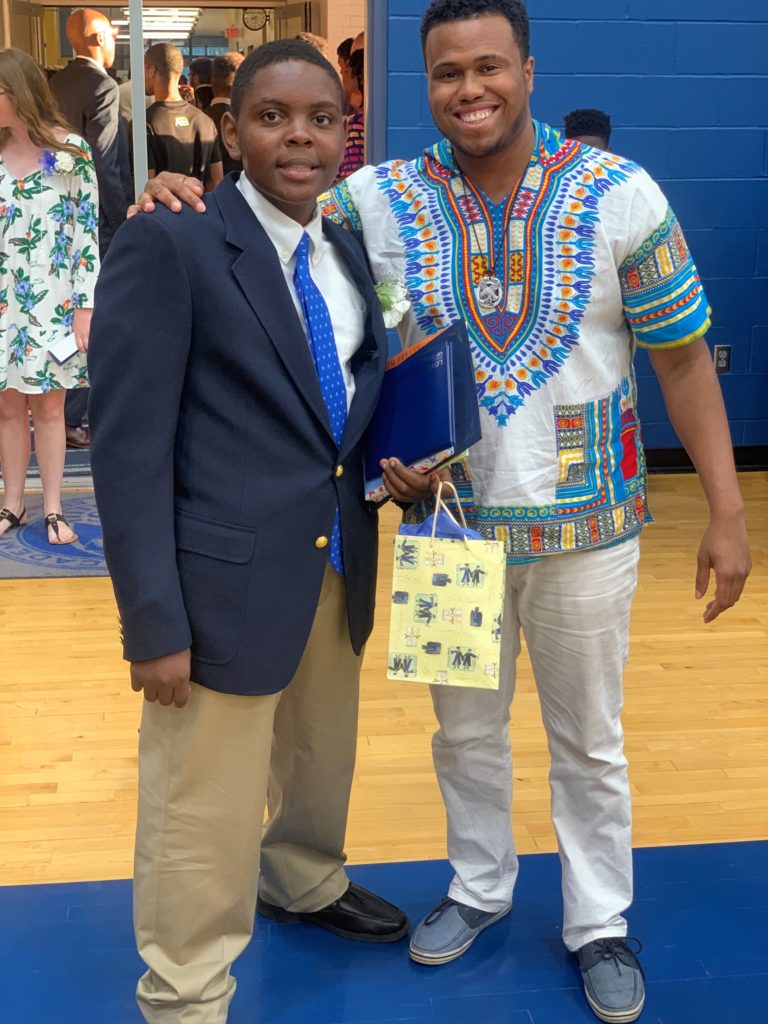 “Akeem broke me out of my shell of being scared to write about some things, like my feelings,” says Tyrelle. “At first, I was writing all sad stories. He said, ‘You have happy experiences with people, don’t be scared to write about those, too.’ At first when I tried they didn’t come out as well as I wanted and I wasn’t really confident in myself.”

“He told me to keep at it, and I’m glad he pushed me to write about things other than sadness,” Tyrelle says. “Now I’m writing a book. I figured out the title – Colorvision – it’s a bunch of short stories about different emotions. Most of these stories are general so anyone can relate to them.”

Ever since that first wings outing in early 2018, Mom Makila says Akeem “has been like family.” And while she appreciates what Akeem’s done to encourage her son’s ambitions – as well as helping him secure a job and a school work waiver – it’s where, and how dependably, Akeem’s shown up that stands out in her mind.

“In January, when Tyrelle had his 10th and 11th spinal surgeries, Akeem came up to the hospital. And him just being there, that meant a lot to us – Tyrelle was so happy to see him,” Ms. Makila smiles through the phone. “Being a teenage boy is already a lot. Akeem’s a person Tyrelle can actually count on.”