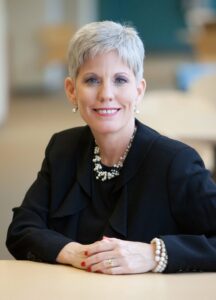 ST. LOUIS – March 9, 2022 – Becky James-Hatter, who has led Big Brothers Big Sisters of Eastern Missouri (BBBSEMO) as President and CEO for 28 years, plans to retire at the end of 2022. She will remain with the agency as a Senior Advisor through December 2023.

When Becky joined the organization in 1994, it was serving 300 youth, wrestling to fund a $300,000 budget and maintain a staff of seven. But in partnership with the Board of Directors and staff, Becky adopted a “put young people first” mindset. This commitment resulted in innovative programs and dramatic growth in impact and scale. Today, BBBSEMO is the largest and most impactful youth mentoring organization in Missouri. It serves 9,000+ youth, supported by a $6.2 million budget and a professional staff of 70. It is also one of the largest Big Brothers Big Sisters affiliates in the country.

BBBSEMO is a steadfast advocate for quality service, not just “more service.” This approach has made BBBSEMO the only agency ever to be awarded Big Brothers Big Sisters of America’s Agency of the Year, Board of the Year, Staff of the Year, and # 1 in Quality Service in the same year. In June 2018, BBBSEMO accepted Large Agency of the Year honors for the second time in a decade.

“The Board of Directors is saddened by Becky’s departure, but we are all very supportive of her decision and excited for her next adventures. Becky and the agency’s dedicated staff have always gone above and beyond to ensure the best for our children and families,” says Dr. Sharonica Hardin-Bartley, Board Chairperson. “Collectively, as we celebrate the past 28 years, we are all looking forward to the next 20 years. We have so many opportunities to do better and more. Staying focused on the future, building more trusting and enduring relationships, and always centering youth and families will be our tribute to Becky’s leadership and service.”

Innovation in programs is a hallmark of Becky’s tenure. The list of achievements includes: They include:

Becky’s decades-long work has also been widely honored. President Barack Obama named her a 2013 Champion for Change in educating African American children, a distinction underscored by her return to Washington, D.C. when the President recognized BBBSEMO for its efforts around college preparation, entry, and completion rates.

In 2014, Becky accepted the call to join the Ferguson Commission as a Commissioner and appointed Chair of the Child Well-Being and Education Equity Work Group.

Other remarkable efforts under Becky’s leadership include redevelopment of the former Woolworth Building in Grand Center, which is now the agency’s headquarters. The 2017 completion of Anew, BBBSEMO's test kitchen and rooftop, expanded the agency's commitment to community. The addition of Anew recognized the Woolworth Building's history of segregated counters by reimagining that as a space that welcomes all people. Standing against racism and standing up for diversity, equity, and inclusion are BBBSEMO priority commitments.

Becky is also a four-time Big Sister who has kept in close contact with Little Sister Ke’Sheara (matched 25+ years) and Little Sister Ivey (matched 20+ years). Becky and her husband Bill were matched as a Big Couple with Little Brother Erick for thirteen years; they remain connected and close today.

BBBSEMO’s Board of Directors, with the assistance of an executive search firm, will lead the search for Becky’s successor.

“At Central High School, the ABCToday network was the key driver in organizing a career day. They set up in our high school, so ALL 10th grade students could participate. 261 students got to learn about different career paths.”
Christa Turner, Deputy Superintendent, Cape Girardeau Public Schools